Ireland international Kieran Marmion has recovered from a back injury to take his place on Connacht’s starting team for the Champions Cup clash away to Montpellier on Sunday (Kick off 3:15pm Irish Time). The scrum half hasn’t played for Connacht since the win over Ospreys in the Sportsground at the beginning of November. Marmion’s inclusion sees him renew his half back partnership with fellow international Jack Carty.

Elsewhere in the backline, Kyle Godwin comes into the Connacht midfield to partner Bundee Aki. While in the back three Tiernan O’Halloran is named at fullback with John Porch and Connacht’s record try scorer Matt Healy on the wings.

In the forwards, hooker Dave Heffernan who was named in Andy Farrell’s first Six Nations squad during the week, starts alongside props Paddy McAllister and Dominic Robertson McCoy. In the second row Joe Maksymiw and Gavin Thornbury are both selected in the second row, with 20 year old Niall Murray among the replacements.

In the backrow, Eoghan Masterson comes in at blindside with Colby Fainga’a at openside and Captain Jarrad Butler at number 8.

Commenting ahead of the game, Connacht Head Coach Andy Friend said: “We had a great win over Montpellier in the opening round but we are under no illusion that the return leg will be a huge challenge. We have picked a strong side and are aiming to win the game and regain some momentum ahead of an important block of games coming in the Pro14”.

“We are delighted to see Kieran Marmion back from injury. He has been out since November and has worked really hard to get back on the field. His experience alongside Jack Carty, will be a boost to us on Sunday”. 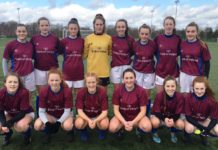