The dates, times and venues for the AIB Football and Hurling All-Ireland Intermediate and Junior Club semi-finals have been confirmed.

Corofin face Nemo Rangers in the All-Ireland Senior Club Football Semi – Final on Saturday the 4th of January in Cusack Park, Ennis at 1.30.

The following day, Sunday the 5th Micheal Breathnach’s All-Ireland Junior Hurling Club Semi-Final with Russel Rovers from Cork will be played in Kilmallock Co Limerick and will throw in at 1.30.

St Thomas will face Borris – Illeagh in the All-Ireland Senior Hurling Club Semi-Final at 4pm on the same day at the LIT Gaelic Grounds.

A week later, on Saturday the 11th, Oughterard face Templenoe in the AIB GAA Football All-Ireland Intermediate Club Semi-Final at the LIT Gaelic Grounds throwing in at 2pm.

The Fixtures for the Galway Teams are as follows: 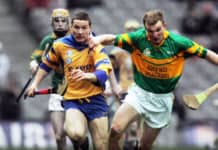